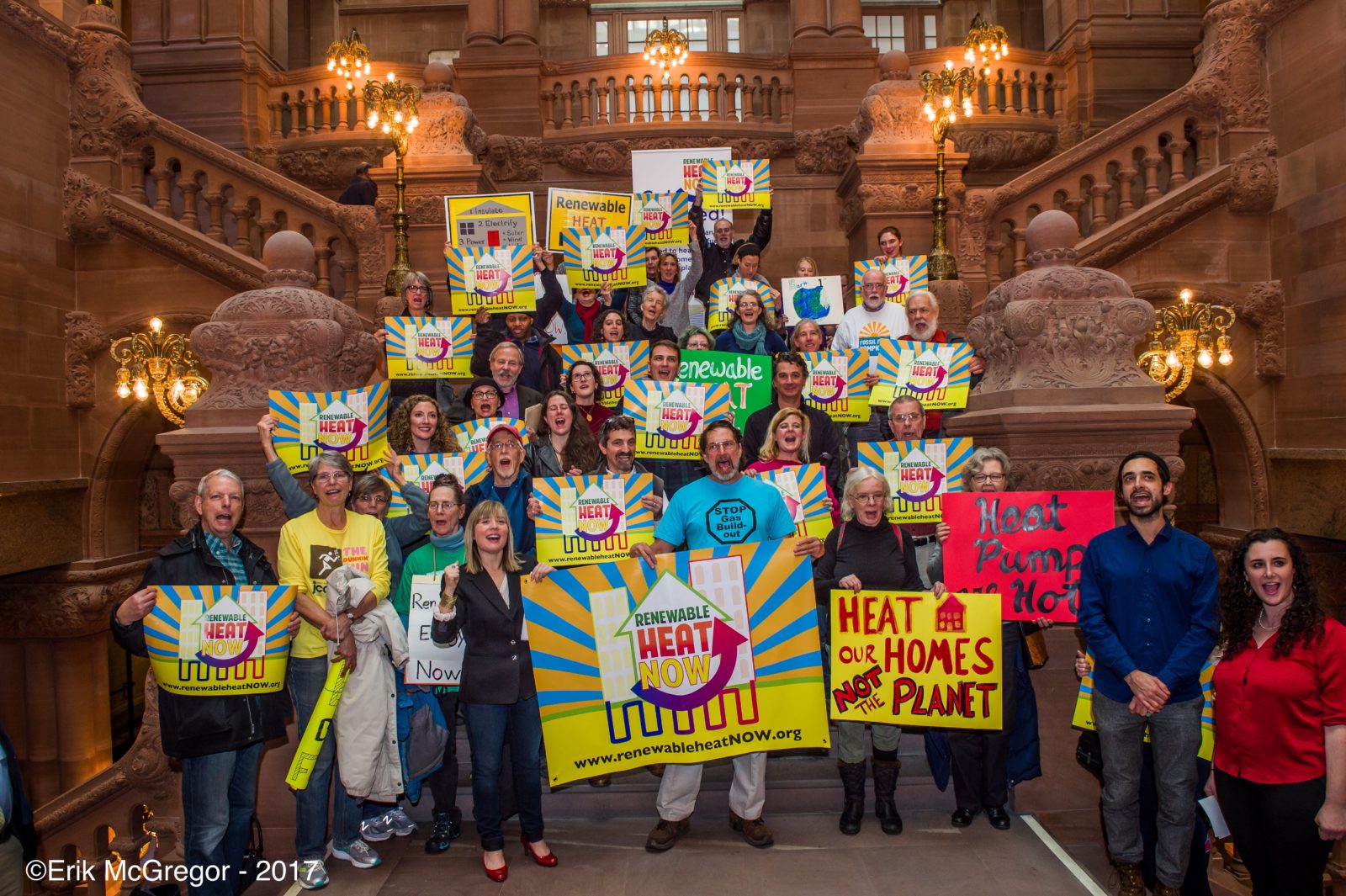 New Yorkers: “We can warm our homes without warming the planet!” 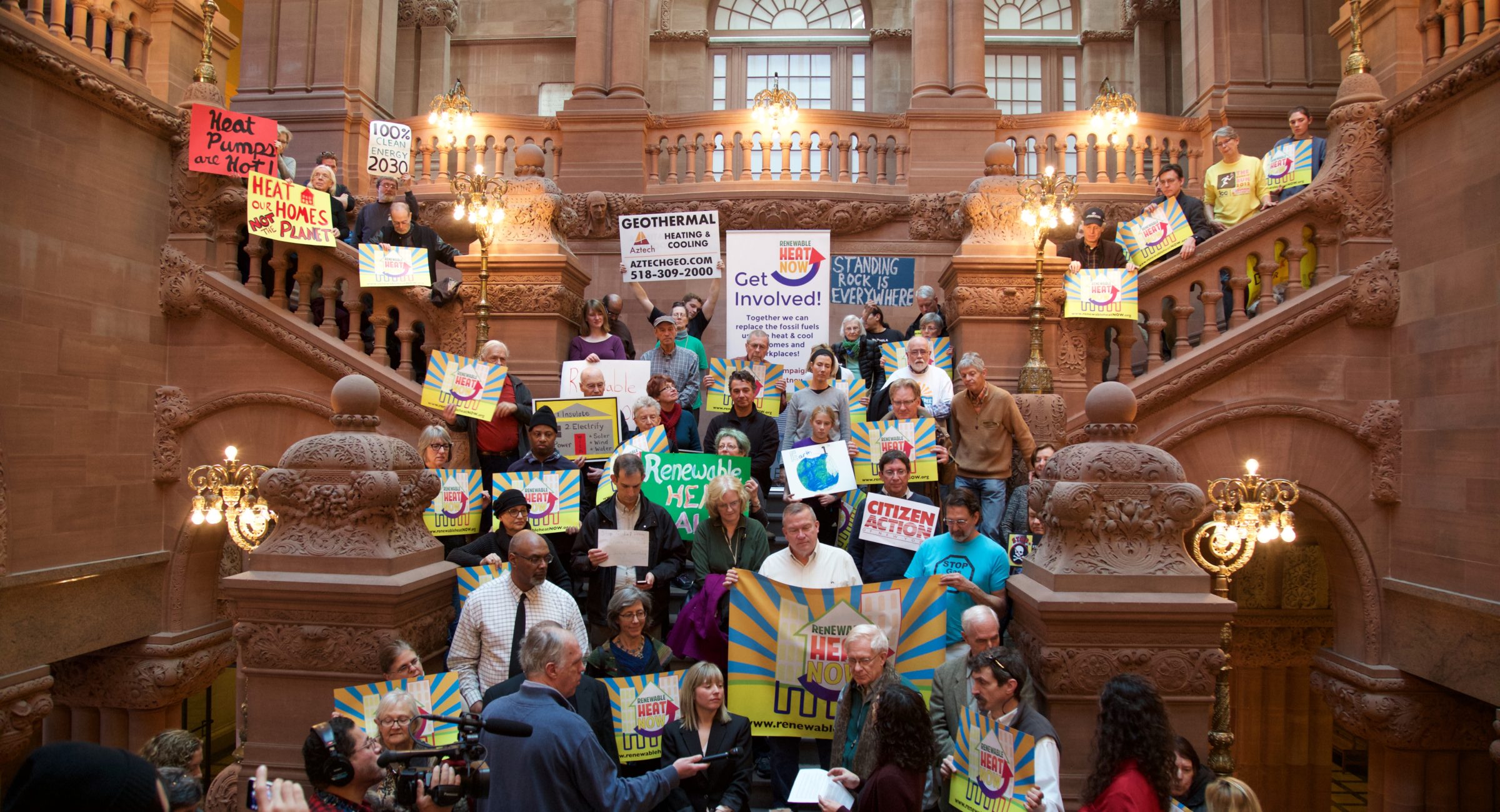 “Momentum and excitement are building as people across New York learn about alternatives to heat their homes without oil, gas, and other fossil fuels,” said Jessica Azulay of Alliance for a Green Economy. “All over the state, people are looking for ways to save money and protect our climate, and they are looking to Governor Cuomo to continue to enact game-changing policies that will make heat pumps affordable and available for all.”

The Renewable Heat Now campaign has already seen successes, as the New York State Energy Research and Development Authority (NYSERDA) this year announced $15 million in rebates for geothermal system installations and $10.95 million in incentives for air source heat pumps. On November 29, 2017 Governor Cuomo signed a bill that allows geothermal to qualify for on-bill financing, allowing homeowners to pay for the installation of their systems over time through their energy bill. This allows many homeowners to see immediate cost savings due to the efficiency of the new systems. 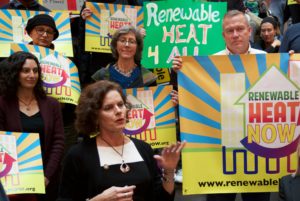 “Moving New York towards a renewable future requires innovative developments in clean energy,” said Assemblywoman Patricia Fahy (D-Albany), who voted for the bill. “I’m proud to be a voice in New York supporting geothermal energy as an important component in meeting our ambitious emission reduction goals.”

Over 38% of NY’s greenhouse gas emissions come from combustion of fossil fuels in our buildings, mostly for heating. Physicians, Scientists, and Engineers for Healthy Energy estimate that in order to achieve NY’s goal of a 40% reduction in greenhouse gas emissions by 2030, 126,000 buildings per year must convert from fossil fuels — including natural gas and oil — to efficient electric heat pump systems.

“Any heating and cooling contractor currently operating in NYS has an opportunity grow their business in the transition to heat pumps,” said John Ciovacco, President of Aztech Geothermal. “The sheer volume of conversions needed will spur significant job creation for local installers, plus attract equipment manufactures and finance companies to support the growth.”

Efficient electric heat pumps are commonly known and used in other states for heating and cooling needs. New Yorkers who move south are often astonished to find how cheaply, safely, and comfortably they can regulate the temperature in their homes with heat pumps. Geothermal systems are the most efficient way to heat and cool buildings in New York and are a complete alternative to burning fossil fuels. Cold climate air source heat pumps are also a good alternative for many buildings. Lack of knowledge of these alternatives, however, results in over 90% of NY homes still relying on combustion heat from gas, oil, and propane.

“We should not be investing our money in fossil-fuel infrastructure that will soon be obsolete,” said Irene Weiser, Coordinator of Fossil Free Tompkins and Town of Caroline Councilmember.  “Instead we should invest in the infrastructure of the future – energy efficiency and heat pumps.” 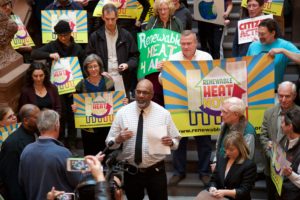 “We also need to reverse New York’s current gas expansion policy, which incentivizes utilities and customers to convert households from fuel oil to gas,” noted Aaron Mair, former President of the Sierra Club. “The technologies to achieve these goals are available today, and we cannot afford to wait.”

“Without swift and dramatic action from Governor Cuomo and other leaders, we face nothing less than climate catastrophe,” said Laura Shindell, New York Organizer for Food and Water Watch.

The Renewable Heat Now campaign launched in 2017 to help educate New Yorkers and advocate for incentives and policies to promote this transition. The campaign’s educational talks by experts Dr. Arjun Makhijani and Jay Egg have drawn crowds all over the state, from curious homeowners and architects to energy activists. The campaign’s platform calls for updated building codes to eliminate fossil fuel heating in new construction, rebates and incentives to promote installation of heat pumps, and policies and assistance especially for low-income homeowners to afford the initial investment in equipment. 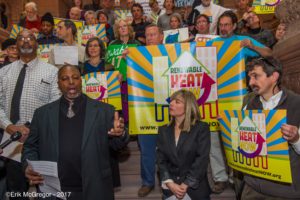 “We are calling on Governor Cuomo to open a request for proposals so that engineers that are learned in geothermal technologies can implement practicable solutions for the proposed Sheridan Ave. Project, to supply renewable energy for the Empire State Plaza and other buildings. New York State can be a national model for sustainable energy,” said Merton D. Simpson, Albany County Legislator and Co-Chair of SHARE.

“Geothermal provides all of the heating and cooling needs for millions of commercial and residential buildings worldwide,” observed geothermal expert Jay Egg, who taught Renewable Heating and Cooling workshops across the state this fall as part of the Renewable Heat Now campaign. In November he penned a critique of the New York Power Authority’s dismissal of geothermal as a viable option for the Empire State Plaza, and met with Albany Mayor Kathy Sheehan.  “Let’s help Empire State Plaza lead the way for New York and become a geothermal beacon for the Empire State.”