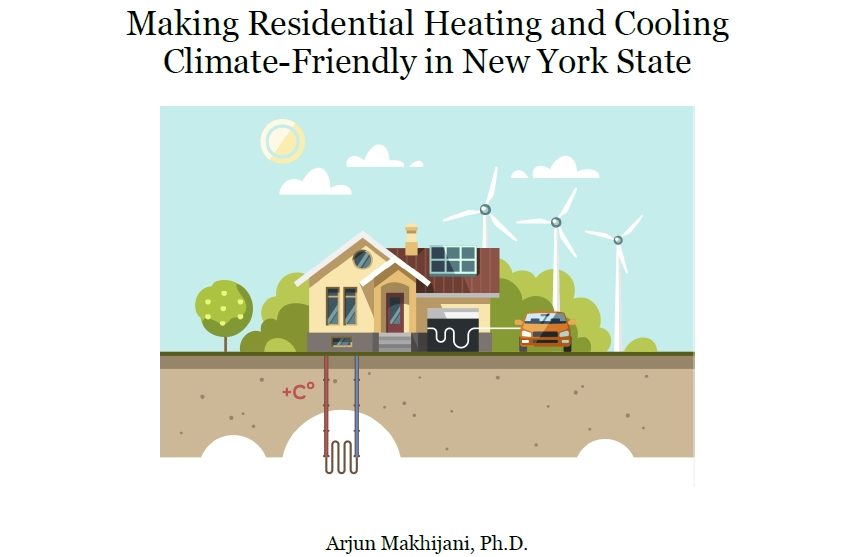 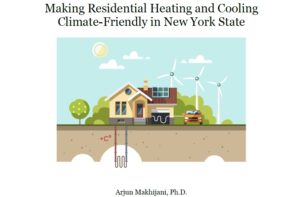 NEW YORK STATE— New Yorkers can reduce the demand for fossil fuels and make home heating more affordable, by changing the way our homes are heated and putting in the right policies, according to a new study released today by Arjun Makhijani, Ph.D., President of Institute for Energy and Environmental Research (IEER).  The study is entitled, “Making Residential Heating and Cooling Climate-Friendly in New York State.” It compares the economics and climate impacts of a variety of heating and cooling technologies and concludes that New York State should adopt a policy of converting fossil fuel heating systems to efficient electric systems, such as cold climate heat pumps and geothermal heat pumps, which are widely available technologies.

“Heating and cooling buildings accounts for more carbon emission in New York State than its entire electricity sector – and the use of fossil fuels accounts for three-fourths of that,” Dr. Makhijani said. “New York must convert fossil fuel use for space and water heating to efficient electric systems, like geothermal and cold climate heat pumps to meet its climate goals.”

Governor Andrew Cuomo recently announced a new $15 million rebate program by NYSERDA to begin incentivizing such a transition. NYSERDA is accepting comments on the proposed program through March 10.

“There is a groundswell of interest in renewable heating and cooling from residents across New York State,” observed Renee Vogelsang, with New Yorkers for Clean Power.  “We thank the Governor and NYSERDA for listening to the need for policies to make heat pumps more widely available, and we will be advocating for policies specifically to make these improved systems available to low-income households who struggle the most with the fluctuating costs of heating homes in the winter.”

“This report identifies two important areas where New York should be prioritizing assistance for conversion to efficient electric systems: for homes heating with propane and oil, and for homes receiving public assistance with their heating bills,” noted Jessica Azulay, Program Director for Alliance for a Green Economy.

Among other findings, Dr. Makhijani’s new study finds that converting from expensive oil and propane heat to efficient electric systems using heat pumps should be a higher priority since it would save more money.  At the same time new homes and retrofits in areas with no natural gas infrastructure should consist of efficient electric systems. Expansion of the use of gas heat is currently contributing to the construction of new gas pipelines across New York, meeting widespread opposition as the pipelines threaten the environment and communities’ safety.

Dr. Makhijani will be discussing the study’s findings, including how to make the transition to heat pumps accessible to all New Yorkers, at workshops in Buffalo, Peekskill, New York City, and Syracuse this week.  The events are organized by Alliance for a Green Economy (AGREE),  New Yorkers for Clean Power, FrackAction, and several local organizations to coincide with the release of the study and the launch of a new campaign to advocate for New York policy makers to adopt the recommendations outlined in the report.

The full report and other resources can be found at www.renewableheatnow.org. 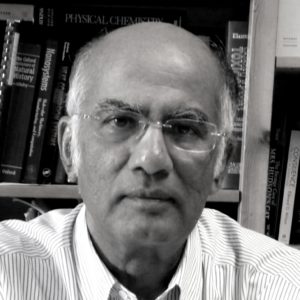 Arjun Makhijani, President of IEER, holds a Ph.D. in engineering (specialization: nuclear fusion) from the University of California at Berkeley. He is the principal author of the first study ever done (completed in 1971) on energy conservation potential in the U.S. economy. Most recently, Dr, Makhijani has authored Carbon-Free and Nuclear-Free: A Roadmap for U.S. Energy Policy (IEER Press), the first analysis of a transition to a U.S. economy based completely on renewable energy, without any use of fossil fuels or nuclear power. He is the principal editor of Nuclear Wastelands and the principal author of Mending the Ozone Hole, both published by MIT Press. Most recently, Dr. Makhijani completed a comprehensive renewable transition study for Maryland entitled: “Prosperous, Renewable Maryland: Roadmap for a Healthy, Economical, and Equitable Energy Future” (November 2016).

Alliance for a Green Economy (AGREE) works for safe, affordable energy and the development of a green economy in New York State. Our goal is a prosperous, safe, and healthy New York, fulfilling the promise of conservation, energy efficiency, and safe, clean renewable energy sources to end our state’s reliance on wasteful and environmentally destructive forms of energy. The Alliance works to promote this transition to a carbon-free and nuclear-free future and educates the public about alternatives that can revitalize the economy and safeguard human health and the environment.